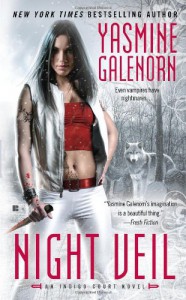 As a change of pace from the other second chance books I've read so far this year (Fire Me Up & Finding Absolution), I read the first book in this series last year. I gave it three stars and really regretted reading one of the reviews I read while reading the book (note that my review for that book includes the information that nearly ruined it for me!)

I'm not going to continue this series. I like the story, but the characters just keep pissing me off! Cicely made a deal with the vampires in the first book (related to what I learned in a review of that book that ruined it for me). Now that guy is an ally (by the end of the book). He's also a complete creep. I get that he's a vampire, but some things are unforgivable. I don't want to read the other books at least partly because he's now and ally and I just really want Cicely to STAKE him already, damn it! I get that they need allies against Myst, but really.

Leo also becomes a complete jerk in this one. I don't remember how he was in the first one, but he couldn't have been this bad if I didn't hate him after that one.

I had to force myself to finish this one, since I had did-not-finishing books and I told myself I'd read at least the next book in each second chance series this year (meaning I do have to finish it, even if it pisses me off!).