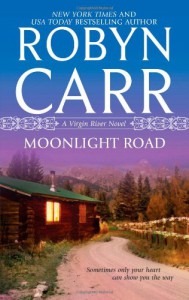 I really liked Erin in this book. I wasn't sure I would, after meeting her in Ian and Marcie's book, but I really did. I also liked Aiden, but I wasn't really surprised by that.

The drama is mostly because of Aiden's first marriage to Annalee. Crazy is one way to describe Annalee, but I'm sure I can come up with better words for her! I really hated that drama, but I almost wish it had happened sooner in the book because it seemed a little rushed to me. I liked their relationship, but I don't really have that much to say about it.

The other big storyline in this one has to do with Mel and Jack. It's been two years since the birth of Emma, their second child, and Mel now wants another. She brings it up with Jack and then ignores all his objections and even makes plans to harvest some of her eggs and getting a surrogate (since the birth of her second child had complications that cost her her womb). I can't say I mind the surrogate idea, but Mel ignoring all of Jack's conversation on the subject really pissed me off. It was a very sudden idea that she just ran with, even after Jack told her he wasn't into the idea. This is the first book that Mel has really made me mad in! I love Mel most of the time, but this was just too much.