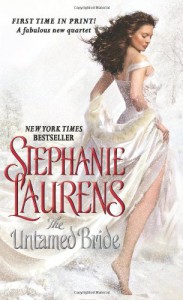 3.5 stars. Really should have read some of her other series first!

I liked both Deliah and Del, but why did the author set their names up that way? Why have her first name close to what everyone calls him? That drove me crazy for a while and typing that reminded me of it!

The romance seemed very separate from the major plot (which spans over the other three books in this series as well). It wasn't until near the end that Del realized he loved her and wanted to marry her. I loved the part that went back and forth between the two of them, him making plans to marry her and her assuming he wouldn't want to marry her since they are lovers already and gentlemen don't marry their lovers. It's not a illogical assumption to make, given the time period and her past.

Having the heroes in this series as officers in the East India company almost ruined the whole series for me before it started. I came really close to setting the book down and just not reading it after learning that they worked for the Company. If they'd stayed in India for very long in the book, I would have. I have a hatred for the East India Company that I can't really explain. I'm tempted to blame the Age of Empires III game and the campaign that comes with the Asian Dynasties expansion pack, but I'm not sure how fair that really is.